reviewed from the good year 2012,
looking back a decade onto the project
with the notorious clarity of hindsight

Hindsight is 20:20
Plot is retrospective 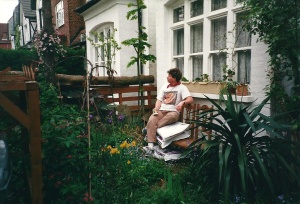 We gardened our street, Stanley Gardens, Willesden Green, London NW2, from end to end, both sides, every available space, around trees and in derelict front gardens, in the first two or three years of the ‘oughties.

That’s the imperial ‘we’, of course, meaning ME. Me, and the neighbourhood kids, and Phil-the-Green and his van, and Pierre-from-the-Park, and Chris-the-Neighbour… and Russell-the-Passing-Rasta, and…

The Circus of Gardening, with Robin as Ringmaster, Clown and Sweeper-Up.

Now, later, as the dust settles, the tinies become teens and we all move on, we may wonder, “What was that all about?”

To garden a while street, other people’s property, no money, years of effort… to what avail?

Sure, there’s nothing like candour. Quite right, I fully agree.

Also: “You’re the most eccentric person I know.” The sure mark of the genuine eccentric is that they know the rest of the world is askew – I have no trouble with that one either.

“An insane project”, there, we agree – but compared to what? There’s the Master Judo Move, the reversal of external energy to one’s own benefit.

Compared to what? What is the clearly preferable, logical course of action in which my energy would be better employed?

Washing the car seems to be a popular activity, twice a week sometimes, as I’m out here doing the street gardening watching this happen.

Stepping over the litter in front of their home, in order to polish that metal box, in order to go hermetically here-to-there-and-back-again…  A bit of road rage to liven things up… And what a grand excuse to pave the planet yet further!

Just wait til I’M King: milk floats for all! But, until that happy day arrives, how best to shape the world?

Turn your hand to that which it findeth. When I win the lottery, my only material fantasy is to create a major landscaping project – shape a garden on a grand scale, even as I do now on paper, play with line and colour, see what comes out: a latter-day Eden.

Until I do win the lottery (which I don’t play), we will instead shape that which is here before us, here and now, this untended space of the street.

But is it Art?

“Art is… whatever you can get away with” – Marshall McLuhan

Well BOY, have some modern artists taken that one to heart – and made an Art of Getting Away With It too. Bless them, why not? Why be any different from lawyers, financiers, politicians? It’s the Modern World after all: appearance is all.

If they can do THAT, I can do THIS.

But… is it discrete in nature, capable of being exchanged, purchased, sold, carried away for private display? Well, no…

No more than, let us say, than the work of Christo and Jeanne-Claude, who famously wrapped the Bundestag, made a running line of umbrellas across California and Japan, and wrapped the Pont Neuf…

Try THAT on for size.

The artefacts, the tangible aspects thereof, once the event is passed, are their preparatory sketches (by all accounts marvellous) and photos thereof.

Put beside THAT work, the Street Garden Project no longer looks such a lunatic concept.

We few, we noble few, we Band of Brothers.

About all the planning that went into my project was a lot of fantasising – a flowing, luxuriant landscape, every seed packet photo/magazine garden article ever seen superimposed on our quiet little one-block street… with herds of antelope coming down to the river’s edge at dusk.

“Building castles in the air is all very well, now build foundations under them” –
Thoreau

As the project unfolded, there was occasion to ponder Nowt as Queer as Folk.

“The kids’ll wreck it,” predicted the cheery neighbours at the beginning. Well, no, it took the council, the petty idiots of local government to do that…

The kids were the fun of the thing. They showed up slowly, just like the rest of it.

The fascination lay in watching an unplanned course of action unfold. All arrived in sequence, each next step floating up into the field of vision: Oh! That bit over there would fit in with this bit just finished!

ONE DAY AT A TIME

Every little derelict, unloved patch of soil has well-nigh infinite potential: I can see green shoots rising up into a burst of leaf and flower. 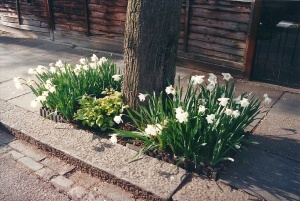 All these patches around every tree on the street, for example… Just allow me to stomp a spade in there, loosen it up a bit, a couple of spade-fulls of leafmould, and then-

What we want are the hardiest plants on God’s green earth. Flat out survivors – stomp on them and they’ll bite you on the ankle. No maintenance garden for public space. Something we can get for free, even better. 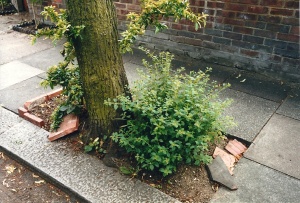 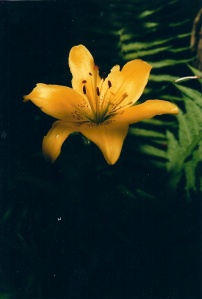 “Any fool can grow a bluebell” – the street gardener’s motto.

One day, to my surprise, I realised that the teenagers must have been participating… well, well, well…

It started to ripple out from the front of my place, see an empty place, fill it in, enjoy it all spreading out, perceive the pattern afterwards.

My own front garden started with the usual process: ripping up the concrete. Dear Lord, it’s a FOOT DEEP! A foot deep?! “Let’s fix up our lovely front garden… what we’ll do is put a foot of concrete down!” “Splendid idea!”

Who needs to pump iron at a gym when you can sledge-hammer concrete (seriously, around about now I cancelled my gym membership realising that this was my workout)?

Now we have some lovely chunks of concrete – let’s recycle, don’t dump them. Let us create some terraces, a bit of visual variety. 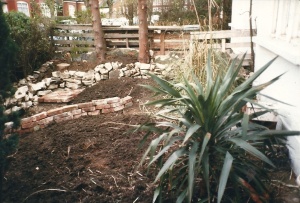 Another challenge: these two leylandii spruce at the side. 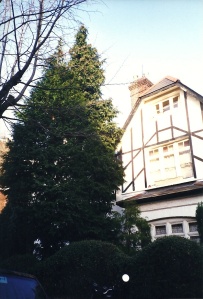 The fastest growing tress on the planet, now regarded as an urban menace, they were harmless little shrubs in their youth. Now they’re taller than the house, a black wall of conifer blocking the light and the breeze, and draining away the soil’s vitality. Everything in its place, and a place for everything – this is not their place.

Good advice from a landscape architect I met in my clinic: “Strip the branches, reduce the tree to a spar, then plant both ivy and clematis: the ivy will give you green all year round; the clematis a cascade of blossom once a year.”

When in doubt, call in an expert. If you can’t get your hands on an expert, call in Mike Taylor. A Man with the Hat for the Job.

And verily, it worked.

Creating a seating area in the sun gave a chance to get playful and creative with recycled materials. 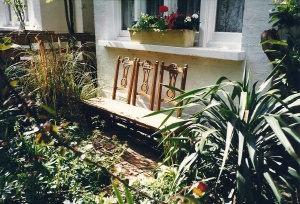 Hide the huge grey bin with a surround of trellis, plant all around it: camouflage. 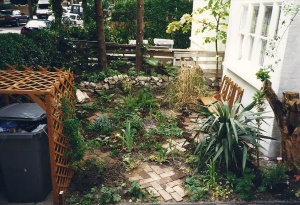 And the place is starting to pull together.

A path of brick: you always lay out the path first, avoid stepping on the soil you’ve so carefully prepared. Dig in sand to break up the heavy Thames Estuary clay, and leaf-mould composted in the local park to give it some nutrition.

After all that, the planting seems but the work of a moment: the quick fun bit at the end that makes it all worthwhile.

Arrange the rose over the front door: next door has the same rose; with their permission, pull them together to meet in one big arch. 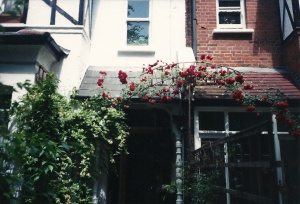 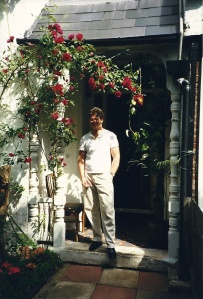 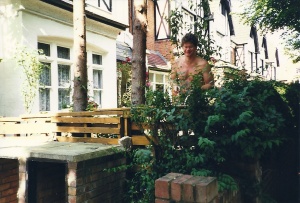 Dear me, these sloppy folks next door, their bins all askew: it offends one’s sense of order. Although their front garden is smothered in cement, to cuddle a car to its bosom, there is room for a bit of work on each side: a bed of day-lilies and some ivy to climb the fence.

Around those wretched bins, we put a planter stand holding ten inches of soil on top, hoping for trailing plants to take hold and mask the bins. Optimism prevails. 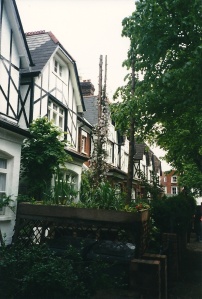 Bins, bins: essential objects of course, but they hardly need to be the primary visual statement along our happy street (has-bins, one would prefer).

From there: to the other side, the front garden to the left of our house, neglected fro the dozen years I’ve been there. This is getting to be a ritual: ask permission/explain project; dig, transplant.

The woman offered to pay me. I find the better part of wisdom is to refuse: retain autonomy in this the Art Project. Expenses, okay, for purchases.

First move: we made an arch over our shared gateways, towards the vision of the entire street as a stream of flowers from one end to the other. 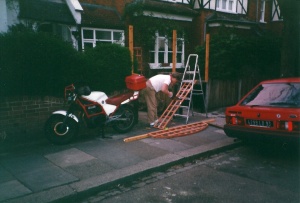 Then we discovered how to make a better arch… with a little help from my friends. 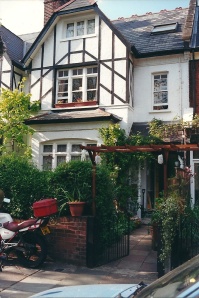 The plants spread along, with some attention to detail…

i was leaning strong on the capacity to salvage and recycle, strengthened by the network of like-minded spirits in the gardening game. Dealing with plants in volume, there tends to be a bit of spillage at the edges. Overgrown gardens offered up their own rewards: colonies of lilies, daisies, iris and so forth, to lift, separate, and re-plant.

on this note, a glimpse of human interest: cycling down the street i discovered a skip stuffed full of uprooted lilies being sent off to their doom. heroic salvager that i am, i promptly returned with my trusty wheelbarrow, to bring them safely home to Stanley Gardens.

the neighbour came by, “thank heavens you’re doing that,” says she. “the new owners have torn up the beautiful back garden and are paving it!” we shook our heads together.

she left, i’m just about to do the same, when the front door of the house opens. take it from me, Colonel Blimp lives. large, fat, red-faced, pompous, an impressive collection of attributes all nestled cosily together.

nine hundred witty remarks clamoured to be heard, but my lifelong polished reflexes of Getting Through (without being hit) always come to the fore.
“well, my goodness, dear me, i am so sorry, i had no idea that i was in any way disturbing you, i did think of knocking on the door, but i thought,’dear me, what if they’re having their meal? then i’d be disturbing them,’ and i just didn’t know what to do, and i was so confused, so i thought, ‘do you know, i daresay they’ve put these plants in this skip because they don’t want them any more’. my goodness, i am so sorry if you were putting them here for safekeeping, but i daresay that isn’t actually the case, but dear me i don’t know…”

no kidding. it was in fact something like that – never let them regain the advantage, blather, it’s called, i can do this by the yard…

confused and muttering, the good Colonel retreated into his fortress, and boy and wheelbarrow whistled their way down the street.