and the process is, to our utter amaze, visibly drawing near the end. we had no idea in the world how long it might take: the inevitable question everyone asks,

“how long did it take?” who knows?

overall, all things considered, very close to a thousand man hours… and, happily, it shows.

the big moment: Jimmy finally sees it, as a work in progress – he has not seen it at all up to this point, i’m working on it as a shot in the dark, he’d specified nothing whatsoever.

and it builds from there, well received all around.

now comes the Big Jump: we apply the oil. 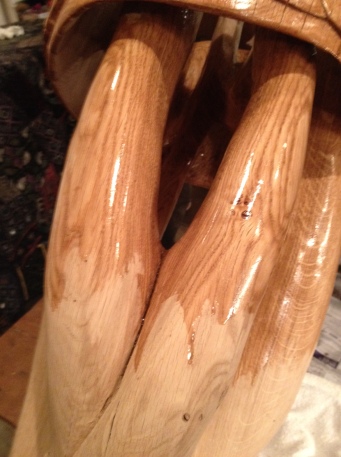 we decided on Danish oil, after no more than the usual dithering, brushed onto the raw wood, which had been sanded, sanded, SANDED in preparation: voila.

even as the butterfly staggers forth from the chrysalis, verily, the grain of the oak leaps forth to dazzle the eye: wow, it really is a big positive change.

Mark, old hand at furniture work, had predicted this; often the victim of my own overoptimism, i had been reserving judgment: i was delighted.

detail: let’s seal the bottom of the wood, so that no moisture can wick up into the grain, no matter how slowly – two coats of Cuprinol, then three coats of marine varnish, that should seal it for a few brief lifetimes of man… 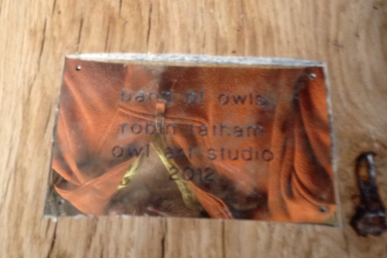 the party combined with the ninth anniversary of the opening of owl art studio (my god), and robin’s birthday (double my god).

<— back to act the fourth

onward to the epilogue —>