once upon a time, there were three byrds.

for there they were, floating on the limitless screen of the imagination.

but had not, up to this point, done any suspended pieces; based somehow on the fact that you cannot do everything at once, and our genius had been otherwise employed.

i personally have always had a fascination with the suspended, moving piece. in youth, creations formed from cardboard held on threads, and finding the balance between the elements: harder than you’d think until you’ve tried it.

a while back, the Royal Academy had a bit of a show of Alexander Calder – somehow he got his name for being the first guy to really show the mobile.

also, less known, the stabile, which is a moving piece standing on a pedestal to the floor, rather than hanging from above.

owl art studio is, of course, devoted to the wonders of wood – no kindding, the fascination of the organis character of each different kind of wood, in its grain, colour, density… and always that magic moment when a piece is finished and then finally we oil and polish, and the colour stuns you – that Wizard of Oz moment when they change the film from black and white to full colour (trippy or what?).

byrds… no matter how far i push or pull my own visual imagination, i’ll never get within ten miles of what the Byrd Kingdom comes up with.

still, one can but try.

this is a three piece concept: each piece complete within itself, and also harmonising with the other two, floating freely in space. an enjoyable challenge.

the three bodies are happily already the same size and shape: we have the segments cut out of the oak trunk that became the band of owls project.

this gives us  a stable starting point. now, suppose we have one byrd rising, one byrd descending, a third byrd highest of all. let’s start with a matched pair of simple forms and see how this evolves.

what do we have appropriate for wings? cast an eye over our arsenal… paduk? err… what’s this? some anonymous light wood should fill the bill…?

and then, of course, a tail streaming out behind, a long neck reaching forward to the point of a beak, ah, the magnificent joy of creation… a new dawn, a new Eden… the glory and the power of mad creativity… oh, excuse me, back to the point.

the point: that would be the neck and beak… every bird has a point (human beings do not follow this rule).

(by the way, check out Harry Nilsson, The Point)

well, we had better look through the materials on hand and available to see what we can come up with in service of these goals. theoretically you could go out and buy anything in the world to create your concept, but it is a little bit hard to imagine, pulling the image out of empty space, as it were.

let’s take a look at what is on hand and see what would best fit the concept. our wee supply of planks and pieces purchased from specialty wood shops over the years, put aside for the appropriate occasion:

sometimes people don’t understand that every colour is a different kind of wood: we do not colour it.  we try to maintain a stock of different woods, to facilitate the evolution of each individual project. amarillo for the neck: a light lemon colour. 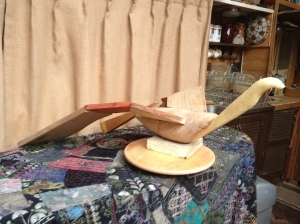 the byrd starts to spread its wings…

and, of course, every bird has a tail to tell: 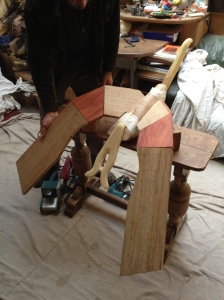 counterbalancing the head, harmonised with the shape and size of the wings… and, of course, a pleasure to the beholder. there’s the essential concept here in this, the visual art world…

with this kind of woodwork, it is not so much actual carving, that is, removing excess wood from a block to reveal a shape; rather, it depends on a type of joinery, creating the shape from subordinate elements, then carving and sanding, sanding, sanding, to create the final, fluid form.

shall we pierce the wings to give them a depth and an interest?

how does this wing find its organic, stable reality? let’s try this piece of paduk as a brace:

the proud and flowing plumes, the ornamentation that every proud bird flaunts to the universe… in this case, a mohican of walnut spikes.